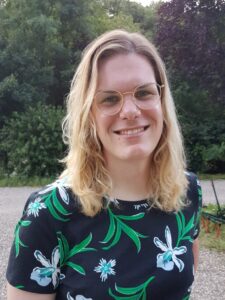 My name is Bente Hilde Bakker and to my big surprise and honour I’ve been granted this year’s Stieltjesprijs for my thesis titled “Nonlinear waves in local and nonlocal media: a topological approach“. I did my PhD studies at VU Amsterdam and I’m currently working as postdoc at Universiteit Leiden.

I did my studies in mathematics at the VU Amsterdam. When I decided to pursue a PhD I had a hard time choosing between topology/geometry or dynamics/partial differential equations (PDEs). Luckily I found a nice project blending the two fields, working with Jan Bouwe van den Berg and Rob van der Vorst as my promotors. I started working on developing topological invariants which capture travelling waves in reaction-diffusion PDEs. This turned out to be possible only by considering much more general equations which involve nonlocal terms. That’s how I rolled into the field of nonlocal equations, such as lattice differential equations (LDEs). Though formally these share a lot in common with their PDE counterparts, fairly little of the tools known for PDEs extend to the realm of LDEs. It’s all the more exciting that I’ve managed to develop my topological tools for LDEs and similar nonlocal equations.

At the award ceremony, I will give an overview of some of the key results from my thesis.

Check out these links for more information about the award and a short film of Kateřina:

Use this tool to manage your registration.